Enjoyed for its understated elegance, Old English pattern is one of the most popular flatware patterns ever made in sterling silver. First produced in the 1760s and still produced today, Old English is a timeless looking pattern which would have been found in Georgian, Victorian and Edwardian homes. The early, Georgian Old English tends to be lighter with a more pointed bowl to the spoon. The later, Victorian and 20th century Old English is heavier with a more rounded bowl to the spoon. 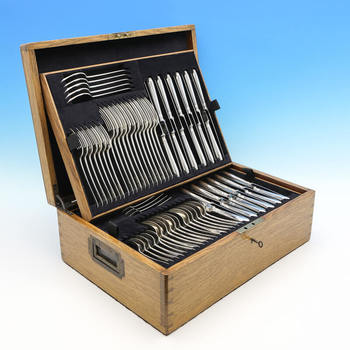 A boxed, Single Maker, Mixed Years set of Antique, Sterling Silver Old English Pattern Flatware, hallmarked in London between 1896 and 1910 by Jackson & Fullerton. Presented with Old English Pip knives hallmarked in Sheffield in 1975 by A. Haviland-Nye.